1. The “On a Wing and a Prayer” award to Airbus 380 pilots. As reported on UK’s MailOnline, an Airbus 380 lost its wingtip in a taxiing collision with a building at Paris’ Le Bourget airport, just two months after another of the super-jumbo jets was grounded for striking a private jet on a tarmac in New York’s JFK. The world’s largest passenger aircraft has a 262 foot plus wing span. While this is unusually long for pilot to maneuver, aviation officials pointed out that even though the investigation is in the early stages, they are pretty sure the building was not moving at the time of the incident.

2. The “Dog Days of Summer” award to Stewart Gibbs of Chicago. Police arrested Gibbs for animal cruelty after they were called to his condo and discovered that Gibbs, who was highly intoxicated, was trying to operate on his dog.  After the cops discovered blood all over his walls and carpet, Gibbs claimed he was trying to remove a cyst from the dog’s ear. While Gibbs admitted to not being a veterinarian, he did claim to be a cardiologist and therefore qualified to put his dog under the knife. While Gibbs himself was pretty well anesthetized, the dog was not. Police found no record of him having any medical license in the state of Illinois.  The pooch was properly treated and removed from Gibbs’ custody. Doggone!

3. The “Itsy Bitsy Teeny Weeny Red Hot Polka Dot Bikini” award to Robin Corrente of Long Island, N.Y. The sun worshiper said she landed in the hospital with third-degree burns on her bust after the underwire in her two-piece bathing suit became superheated, the New York Post reported Sunday. After sitting out one afternoon in 90 degree plus weather Corrente started to hurt and went in to shower only to discover blisters on her bosom. She went to the emergency room where doctors removed a dime sized patch of skin from under her right breast. Corrente is suing the swimwear manufacturer Coco Reef. Their spokesman, Hugh Hogans, gave a statement saying “we intend to push up our investigation into this incident. In the meantime, they are temporarily pulling their advertising slogan “Be burnin’ hot in a Coco Reef!”

4. The “yeah, but she’s got a great personality” award to Beautifulpeople.com. As reported by NewsCore wire service: “An exclusive online meeting place billed as a dating website for “beautiful men and women” was causing new outrage Monday after dumping 30,000 members deemed too ugly. Last month Beautifulpeople.com was the victim of a cyber attack in which the virus attacked the software used to screen applicants, allowing an influx of new members. Unfortunately several thousand of those members failed to meet the Denmark-based site’s aesthetic standards, and have now been dropped.”

While the actual letter to those that were being dismissed was not available, sources close to Big Al indicate the rough draft reads something like this:   Dear Applicant, please accept our sincerest sympathy for your lack of aesthetic appeal. With full realization that this is not your fault, but rather a horrible chance event somewhere in your family’s gene pool, unfortunately we cannot change our membership requirements at this time. However, since this mix-up is partly due to us, we are enclosing a list of recommended plastic surgeons in your area. We sincerely hope you will avail yourself of this avenue and reapply at a future date.

5. The Magilla Gorilla PMS Intervention” award to the U.S. Government. This guy says it better than I ever could. (Courtesy YouTube and CNS News)

And from my favorite topic; “man-made” Global Warming, these awards:

1. The “just when you thought it was unhealthy to eat green meat” award to environmental scientists. Reported from guardian.co.uk “According to the analysis by scientists from Oxford University and Amsterdam University, lab-grown tissue would produce greenhouse gases at up to 96% lower levels than raising animals. It would require between 7% and 45% less energy than the same volume of conventionally produced meat such as pork, beef and lamb or mutton, and could be engineered to use only 1% of the land and as little as 4% of the water associated with conventional meat.” In short, this is “green” meat grown in a lab. Yummy.

While the avid accusers of us “climate criminals” will herald this as an energy-saving and land/water usage Nirvana, your humble author sees the hidden message in this study. That is, a subtle admission by the climate group that it is not man who is responsible for perceived global warming but rather, flatulent cows. Glad I could clear that up for you.

2. The “hold off on that windmill order, Spanky” award to conservation groups trying to force cuts in greenhouse gas emissions from power plants. A recent 8-0 decision by the Supreme Court blocked the federal suit filed by these groups. Justice Ruth Bader Ginsburg, writing for the court, said “the Clean Air Act gives the EPA authority to regulate carbon-dioxide emissions from power plants.” The landmark environmental law leaves no room for what Ginsburg described as “a parallel track; control of greenhouse gas emissions by federal judges.” The power plants in question celebrated the decision by turning the power back on at the homes of the Supreme Court judges. When asked by the conservationist groups why their power had not been turned back on yet, the plants’ spokesman responded “we’re waiting for parts.”

3. The “why do I get the feeling this is going to be my fault too?” award to all us pathetic Man-made Global Warming deniers. From Newsmax.com: according to several analyses by the U.S. National Solar Observatory and the Air Force Research Laboratory, the earth could be heading for a “little ice age.” Low sun activity is cited as the reason. In recent measurements, sunspot activity, intense solar eruptions caused by magnetic activity, has been astonishingly lower than predicted, which translates into a period of cooling. The article states further; “They have seen this type of slowdown before, during a 70-year period, from 1645-1715. Scientists called this period the “Maunder Minimum.”

During this period, researchers reported, “rivers that are normally ice-free froze and snow fields remained year-round at lower altitudes” — the culmination of a little ice age. Many rivers that do not freeze over today, such as the Thames, in fact did freeze over, at times allowing people to walk on the Thames and even armies to cross. The trends that led to that Maunder Minimum seem to be repeating in the current cycle, leading scientists to predict another little ice age according to Dr. Frank Hill of the NSO . “Three different views of the Sun point in the same direction . . . a powerful indicator that the sunspot cycle may be going into hibernation.” In short, less sunspot activity, more ice skating.

In related news, Algore denied rumors that two days after this report was published he switched all his investment holdings from alternative energy to L.L. Bean and Patagonia Winterwear companies. 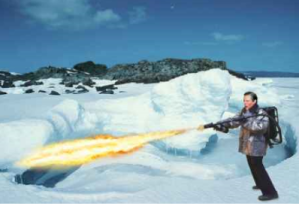 Pictured at left: Algore during his recent Arctic trip to confirm the melting of the polar caps.