Back by popular demand! OK, so it’s because I don’t have any other inspiring ideas, but c’mon, where else can you find a compilation of America’s best and brightest displaying their IQ’s. So here goes ….the latest edition….. hot off the press………

1. The “life is like a box of chocolates” award to the 400-lb woman in Miami whom police found sitting completely nude on a bus stop bench. The woman, who claimed she had just stopped to change clothes, was found to have several other petty crimes on her record. Miami police have recently instituted a policy of cracking down on cases of public nudity, but stated that this incident gives much more weight to it.

Honest, officer, the “master” will be right back. He just went for some more paint.

2. The “he couldn’t possibly screw this up worse than the real guy” award to director Robert Rodriguez who has cast Charlie Sheen as the President of the United States in an upcoming sequel to the hit cult movie ‘Machete”. Proving the adage that “everybody deserves a 20th chance”, Rodriguez said he was excited to have an actor of Sheen’s caliber for the role. Besides, opined Robert, his father was a make-believe president once and if the Bushes can do it, so can they.

3. The “it’s just like taking candy from a baby” award to the homeowner’s association in a Denver suburb which has temporarily banned 3-year old Emerson Cohen (and therefore, all other children) from drawing on the sidewalk with colored chalk. Citing Emerson’s artwork, consisting mostly of hearts and flowers, as a distracting and offensive blight on the neighborhood, the association plans to take up the issue at the next meeting to vote on a permanent ban. An association spokesperson declined comment when asked if there was any truth to the rumor they would also be voting to ban the melodious ice cream truck due to noise pollution.

4. The “I’m pretty sure I can squeeze in here” award to the 74-year old driver in Chicago who overshot a parking space, went through a wire fence and landed on top of a Jaguar and Mercedes that were parked on a lower level. As the man was getting ready to back out, he had his car in forward by mistake when he hit the gas pedal. As with all misfortunes, there’s always a silver lining. The long-standing question about which of the three rival luxury cars comes out on top has finally been answered. 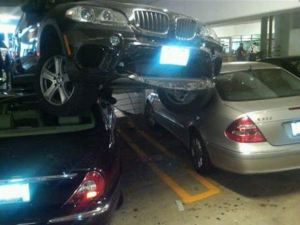 5. The “Shore and Begorrah” award to the guy in Seattle who called police from the Belltown Bar where he had been drinking most of the night. When they got there, they found him bloodied and battered. When they asked him how it happened, he replied that he was attacked by a bunch of Leprechauns. Questioned further on why he stayed in the bar and didn’t flee, he responded: “there were Zombies outside and this seemed like the lesser of the evils.” Police assured the man he would find no Leprechauns or Zombies at AA meetings.

“Be afraid, be VERY afraid!”

6. The “why is there always a cop around when you don’t need one” award to Anthony Mastrogiavoni of Prince Georges County, MD. It turns out that Anthony had been impersonating a patrolman in the area for quite a while when he unwisely pulled over a cop who was off-duty and in his personal vehicle. In short order the tables were turned and Anthony quickly left the area. The real cop followed him, alerted other on-duty cops, and not long after Anthony was arrested for impersonating a law officer. Anthony told reporters that he wasn’t worried when his case eventually comes up for trial, as he will be impersonating the judge as well. 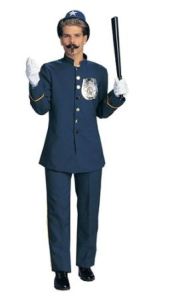 “Just one question. How did you know I wasn’t a real cop?”

7. The “and I don’t like my poached eggs too runny!” award to Vinod Adhikary of Virginia. Vinod broke into a vacant hotel room in Manassas, VA and immediately ordered room service. Intending to eat and flee, Vinod was instead surprised to see not the meal, but the police arrive when the alert hotel clerk realized the order was from a room that wasn’t booked that night.  Vinod will now be getting his next several meals via cell service instead.