If you are a follower of Facebook, you know that seemingly every other day there is a brain teaser posted by someone.

You’ve all seen them, the image of a chart filled with hundreds of letter “O”s except one. You are asked to find the lonely letter “C” hiding ever so cleverly among them. Or the one where there are hundreds of images of a man’s face and all but one are exactly alike. Yes, there’s one that’s actually winking at you, but you’ll never find it! Or whether you can count how many times a particular letter appears in a sentence. 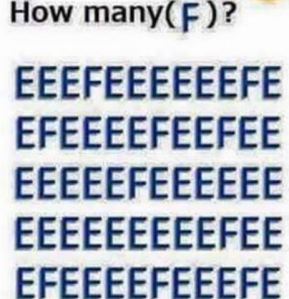 But if you succeed, you are asked to just click “like” so as not to spoil it for the others, who are still laboriously searching and getting close to committing hari-kari over thinking they are the only one in the world who can’t find the “2” among all the “z”s in the chart, in this poor man’s game of “Where’s Waldo?”

So how do I know that I’m a genius? Because I’ve always been able to find the one that was different. Why, I’m such a whiz, I can even find it well within the allotted time frame given. I don’t know, I guess it’s a God given gift. I know this smacks of self-aggrandizing, but it’s hard to be humble when you’re this good. And the thousands upon thousands of people who click “like” are not fooling me. They’re just doing it to look smart. They’re totally exasperated at their lack of discernment and don’t want everyone to know it.

Well, I won’t dwell on my obvious Einsteinian capabilities any longer so as not to offend my less talented readers. Besides, I have to finish my Mensa application and get it in the mail.

But for all my loyal readers who may be snowbound from a winter storm, I leave you with this:

How many times did the letter “i” appear in this blog?

33 thoughts on “Before Facebook, I had no idea I was a genius.”