Something I’ve fortunately avoided for my entire adult life is about to occur. I am going to have major surgery. I haven’t been in this position since my childhood appendectomy at age ten. But I don’t count that because I had no idea what was going on and besides, I was bribed with having all the ice cream I could eat afterward. What ten-year old wouldn’t say yes to that?

No, this one is an all out, no doubt, gonna hurt some procedure, and all the ice cream in the world ain’t gonna change that. Well, not the actual surgery, but the recovery and rehab. In mid-July I will be having my left hip removed and replaced with a store-bought version. Yes, the old ball and socket that got me though all those youth sports, 25 years of daily jogging and then another twenty years of daily power walking has reared its ugly head and said “no mas.” I mean, I only put a few thousand extra miles on it, go figure?

Just a couple of short months after having my lower back ablation, which has worked wonders by the way, my flavor-of-the-month arthritis let me know the hip was next in line for an exorcism. My family doctor sent me off  to an orthopedic doctor who after one look at the x-ray declared my hip a no walk zone.

Next on the agenda was attending “Joint Class” at the hospital.  It’s not the kind where you learn how to roll ’em and smoke ’em, this is to find how to cope with a large hinge-like metal object where bones used to be. It’s kind of like adopting a child. First, through myriad pre-op medical tests, you have to prove you are worthy of such a procedure. Secondly, you have to learn how to take care of your “new baby.” Spouses and/or partners are encouraged to attend and become your “coach.” Think of it as Lamaze for hips, except there’s nothing whatsoever natural about any of this. Basically, you are dependent on your coach for your very existence during rehab. He/she is also granted authority to hound and vex you if you should happen to try to skip your medications or required exercises. Patty couldn’t hide her big smile when she heard this.

The presenter at this class was great. In a two and one-half hour lecture, she made sure we understood two things if nothing else. One, get all the sleep you can before the surgery because you will get absolutely none while in the hospital. Then she asked us if there was any part of the word “none” which any of us didn’t understand. Having cleared that up, she then let us know in no uncertain terms there would be pain involved. As she put it, the pain we have now is forever, the pain they will inflict upon us is temporary, but the forever pain will be gone. Not a bad trade-off. However, she was then very reassuring that pain control was a top priority with them and they wouldn’t let us suffer too much. It was at that point I stopped sobbing out loud. Embarrassing!

The most perplexing part of this for me is deciding what method of anesthesia is best. Due to a fairly unusual heart condition, my risks during general anesthesia are increased. As an alternative, I can opt for an epidural block, plus sedation. Makes sense, since if I’m going to have a new “baby” I might as well do it like a maternity delivery. Basically it means no feeling below the waist, ergo, no pain. In addition, a sedative to introduce me to sweet Morpheus. I’ve already started sending gifts to the anesthesiologist with the note that there’s more where that comes from after successful recovery from surgery.

I’ve also been impelled to hire a personal trainer at the local recreation center. I’ve maintained a healthy weight most of my life, but only through ball sports and jogging/walking. I’ve never been a weight room type of guy. That’s changing. I need to build up the hip muscles (and several others) before the surgery to make the post op rehab go more smoothly. It’s quite a sight indeed. Some of you may remember the “ninety pound weakling” advertisement from several years ago. That pretty much describes me walking around the weight room. I expected to be dwarfed by the guys, but I’ve yet to see a woman in there that doesn’t have bulkier more well-toned muscles than me. It may be my imagination or my inferiority complex, but I could swear I overheard one of the ladies saying to one of her friends  “here comes bird legs.” Life is so unfair!

The good news is, this is “elective” surgery. You know, the kind of surgery I could wimp out of at any time. And don’t think for a moment that hasn’t already swirled around in my mind. But that would mean a life of limping, then a cane, then a walker, then a wheelchair. So there you have the choice: 1. A relatively short (couple hours) surgery, a few weeks of rehab and pain killers and then slowly back to my normal activities or, 2. Become an invalid. That special parking spot is awfully tempting, but I guess I’m leaning with the one that makes me my “old self” again. 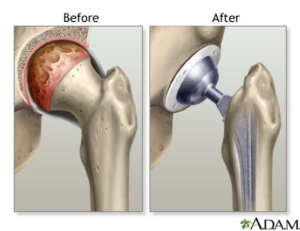 On the left; “old Al” with no cartilage remaining. On the right; proposed “new Al” with the latest in hardware.

I only alert my readers to this for one reason….henceforth, be sure you don’t get behind me in the TSA security check line at the airport, unless you like to hearing loud alarms going off.

26 thoughts on “I’m finally getting hip…..it just takes me longer than most people.”