Time for the last entry of this year’s editions of the “They did what?” Awards. While I feel assured that my fellow beings won’t stop doing stupid stuff for the rest of the year, they will just have to wait until 2013 to have their 15 minutes of fame on this blog.

1. The “gimme a break officer, I’m only going to be parked here a few years” award to Jennifer FitzGerald, who racked up over $100,000 in fines from over 650 parking tickets in Chicago. Claiming it wasn’t even her car but rather her estranged boyfriend’s, she is counter-suing the city of Chicago. It’s hard to tell who the dumbest player in this sordid affair is; Jennifer, who let her boyfriend register a $600 vehicle in her name without her knowledge and then abandon it, or the Chicago police who, despite a standard policy of tow and impound for any vehicle left or abandoned after 30 days, continued to ticket the car 678 times over 3 years. When reached for comment, Jennifer indicated that her plan is to leave the car there for several more years at which time it will officially become an “antique classic” and be worth far more than she will owe on the parking fines.

But judge, I thought they were parking “permits.”

2. The “Duh Magazine stating the obvious” award to King’s College in London for their study showing that smoking can rot the brain and cause dementia. While anyone with common sense already knows that some degree of brain rot must be present to even consider smoking, Kings College spent thousands to tell us something we already knew. In related news, in an apparent pique of professional jealousy, the researchers of four other diseases: cancer, heart, stroke and lung have claimed that while this Kings College report has merit, each of them still claim that it is their disease that has the honor of being the number one cause of death from smoking. Put that in your pipe and…..well, never mind.

3. The “they check in, but they never check out” award (posthumously) to the late Edward Archbold of West Palm Beach, Florida. Edward recently won a roach eating contest in Miami and won the grand prize, which was a python. Unfortunately, Edward is no longer around to enjoy his prize because the roach parts blocked his windpipe and he died from asphyxiation shortly after winning. While we should be sensitive to not making fun of a terrible misfortune like this, we would be equally remiss if we didn’t thank Edward for ridding our world of hundreds of these ubiquitous pests. While funeral arrangements are not complete, the family has indicated that, to honor of Edward’s belief that nothing is too disgusting to eat, his remains will be fed to the python.

A nest of roaches, or as Edward would have referred to them, “lunch”.

4. The “hey man, I really love you, man, no really man, I really, really love you” award to Humboldt University of California (where else?) Humboldt, long known for being ahead of the curve on social issues, has announced a separate department to educate on the affects of marijuana. Yes, this esteemed institute of higher learning has revealed its plans to provide educational lectures on the affects of Mary Jane. With two states, Colorado and Washington, having just passed laws allowing recreational use of marijuana, Humboldt is only providing what the population wants, according to spokesmen. The syllabus for the first class, Toaking 101, includes such educational issues as 1. Smoking, but not inhaling (Bill Clinton – guest lecturer) 2. Be responsible – roll your own and 3. “When the munchies hit – the 10 healthiest junk foods.” 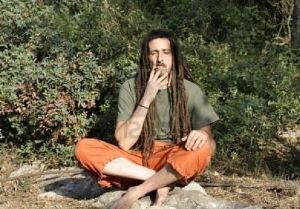 5. The “I wondered why she always wanted the lights off” award to the Belgian man, named only as Jan, who discovered his Indonesian wife of 19 years was originally born a male. Jan, who stated he felt like he had been assaulted upon revelation of  her original gender, is trying to get an annulment from the Belgian courts who, of course, are “waffling” on the issue. Monica, his wife (and I use the term loosely), kept up the ruse by pretending to menstruate for several years, as if PMS didn’t have enough bona fide adherents already. For Jan’s part, while the court proceedings continue, he is undergoing psychiatric counseling to deal with his issues, not the least of which is why he is a man with a name like “Jan”.

“What hot-blooded male wouldn’t be taken in by her?”

7. The “sorry, I just don’t have time to vote” award to the American public who according to a CNN report were able to find their way into stores and on the internet to shop on “Black Friday” the day after Thanksgiving. Annually considered the busiest shopping day of the year, it was reported that 247 million shoppers remarkably appeared in one of the most uplifting examples of American spirit and patriotism on record. As the article points out: There are, according to the 2010 Census, an estimated 308,745,538 folks living in this country. Under the age of 5 years old, there are 20,201,362; between 5-9, there are 20,348,657; and between 10-14, there are 20,677,194. That means, if you subtract those who are too young to shop, 0-14 year olds, from the total U.S. population, there are 247,518,325 adult people in this country, almost the exact number of people who went shopping this past weekend. I’m no math wizard but I think that’s about 100%. Compare that to the average of about 52% of eligible voter’s who have turned out in Presidential elections since 1960. That is to be expected however, since electing a President pales in comparison to having the latest state-of-the-art Wii game under the tree at Christmas. And this year, in an extraordinary display of Christmas spirit, only 4 shootings and 3 all-out riots were reported across the country. 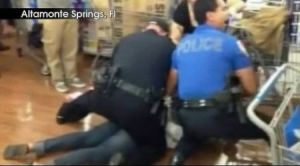 Another happy shopper being interviewed by store personnel for a “satisfaction survey.”