As some of you know, we live in Virginia Beach, Virginia. While it is a beautiful “play land” with ample beaches and tree-lined inland water ways, it is also a part of the largest military complex in the world. In fact, our house is just two miles from the home of Seal Team Six (of Bin Laden fame). If we walk west on our beach, in a half mile we come to a fenced-in “off limits” area which is their training beach.  It is part of the Little Creek Joint Expeditionary Base.  I often wonder when I see a buff jogger running past, if he is one of the heroes of the Bin Laden raid. In addition, Virginia Beach contains the Naval Amphibious Base,  Oceana Naval Air Station, Dam Neck Marine Annex, and Fort Story Army Base. In the next city over, Norfolk, you have the Norfolk Naval Base, largest on the East Coast, and the Norfolk Naval Air Station. A major Coast Guard station resides in Portsmouth, VA. Across the water from there is Fort Monroe and Langley Air Force Base in Hampton, VA,  Fort Eustis in Newport News and the Naval Weapons Depot in Yorktown. In total, there are in excess of 165,000 military personnel at these various locations. This doesn’t even account for the immense ship-building facility in Newport News.

As an interesting aside for my many readers in Great Britain, I’m sure you have noticed a lot of English names among these places. Of course, this is where the settlers first landed as they were establishing colonies. Jamestown and Williamsburg are also considered part of this Hampton Roads area. And as the world knows, Virginia itself was named for the first Queen Elizabeth, the “Virgin Queen.”

Anyway, without arguing over its merit, one can easily see how the current cuts in military expenditures being made by the government will deeply affect this area. Fortunately, in this geographical region of well over one million people, there are other economical interests, not the least of which is tourism, but there are few that wouldn’t be affected in some way by a reduction in military presence.

But I was never so starkly reminded of this as when I passed by the Norfolk Naval Base just the other day on my way to Hampton. Across the water I could see the superstructures of 5 Nimitz Class aircraft carriers. (See photo) That is half of the 10 carriers currently active in the U.S. Navy Fleet. Considering four of those ten are stationed on the West Coast, that is quite remarkable. I have lived in or visited this area frequently over the past 47 years. In fact, during my time in the navy in the mid-60’s, I was stationed on an aircraft carrier at this very site. I have never seen more than 3 carriers in port at any one time in that entire period. Usually, there is only one or two. I guess the good news is, there will be more sailors in port to spend money. 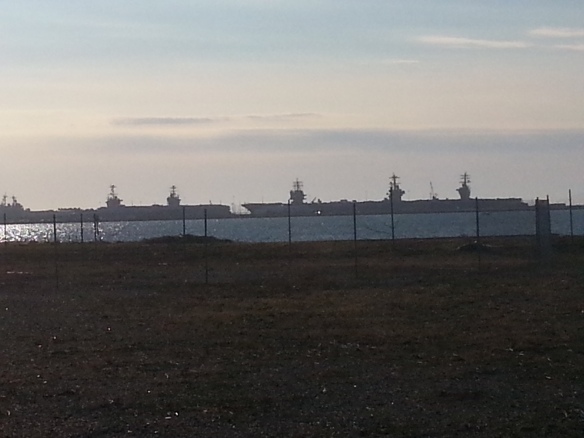 Well folks, that’s your history and geography lesson for today. They’ll be a quiz tomorrow so be sure to bookmark this post. Here’s an sample of one of the multiple choice questions:

Q: Al will no longer be blogging on WordPress because he:

a. Has been indefinitely detained by the U.S. Navy Shore Patrol for taking unauthorized pictures of a military facility.

b. Is being held and questioned by the FBI for posting military facts and locations which might be useful to the enemy.

c. Has been arrested by the Department of Homeland Security as a suspected member of a terrorist cell and is currently in Guantanamo.

d. Is being treated in a mental facility for an extreme case of nostalgia.