OK, not really, but almost. But I’ll bet a cheer went up from all my female readers.

The second entry in my new series, “Our litigious society” truly shows how far our legal system has gone into the crapper. On a Virgin Airlines flight from Philadelphia to San Francisco, a man named Salvatore Bevivino became irritated with the flight attendants about not getting his drink order filled as fast as he wanted. Afterward, in an apparent “in your face” gesture or more correctly, an “in everyone’s face” gesture, he used the lavatory, intentionally did not flush the toilet, left the seat up and the door open and walked back to his seat with a grin and a few profanities for the flight attendants. He was detained by the pilot as a suspicious person after the flight landed. Subsequently, he was removed from the plane by police.

But sad Sal will have the last laugh, presumably. He took his potty-mouthed self straight to a lawyer and is suing the airline for $500,000.00 citing false imprisonment, discrimination and denial of equal rights. Mr. Bevinino  professes total innocence of this incident because flight attendants really have nothing better to do than make stuff like this up. He further cites in the suit that it caused him embarrassment, humiliation, mortification, mental anguish and emotional distress, and damage to his professional reputation. Apparently, the fact that this litigation is bringing nationwide, if not worldwide attention to his imbecilic act is totally lost on him.

We don’t know how the airline is going to handle this but it appears to me that Salvatore has a few high legal bars to meet in order to make his case  1. He was detained, but not arrested so there was no imprisonment. 2. He has to prove the airline is profiling people from Philadelphia (maybe he does have a point here, we all well remember those colonial terrorists Ben Franklin and William Penn). 3. He’ll have to spin the Constitution some to prove that it specifically enumerates the right of every citizen to not flush, leave the toilet seat up and the bathroom door open. I recommend his attorneys try for an all male jury.

As a side note, the suit did not indicate whether the contents of the toilet represented a 1st or 2nd degree offense.

Below: Salvatore arriving for his court appearance. 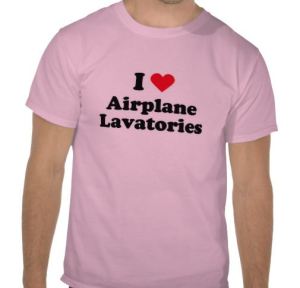 21 thoughts on “Man arrested for leaving toilet seat up……….”