We often remark how our dog Bella has a face, with her black “mask”, that resembles a raccoon’s. 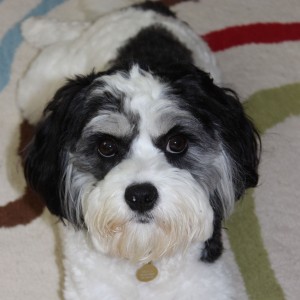 This is Bella, not a raccoon.

A few nights ago, we got the chance to make the comparison first hand. It was a very stormy night following, oddly enough, a very stormy day. We decided to leave our back porch door open so Bella could avail herself of the fenced-in backyard as necessary. It was just too nasty to take our usual evening beach walk. To be honest, we often provide her this late night, easy access even after a walk and especially in balmy fall weather.

On this particular night, that ritual turned a little dicey. As I was sitting at my computer around 8:30 pm in the office/spare bedroom, I heard Bella go whooshing by. Normally she only goes full speed in the house if we have thrown the rubber squeaky ball for her to retrieve. I assumed my wife had done just that. As I turned to see where Bella and the ball had gone, it became apparent Bella had decided to ramp up her game and this time was playing some high stakes fetch. I saw a critter, not named Bella, suddenly jump up on the bed. As it was moving so quickly and hard to identify, I thought it might be a cat that had wandered in through the open door, affording Bella a little nighttime excitement. Alas, it was we who were about to become excitable. It soon revealed itself to me that it was not of the feline persuasion, but rather a bona fide member of the genus Procyonidae. There was no way to tell if it had just ambled in the house out of curiosity or whether it was in an agitated or sickly state.

Having not achieved the desired level of safety on top of the bed, it instinctively did what raccoons do; it tried to climb to safety. However, it was disappointed to discover that the picture hanging on the wall was a poor substitute for tree bark. The portrait came crashing down with the critter, hit a lamp which joined the plummeting pair, and all three hit the floor with a cacophony of breakage. Temporarily stunned, the visitor scooted under the bed, let down both literally and figuratively .

I quickly scooped up the pup who, being somewhat less than worldly and thinking she had this creature on the run, had no idea that the hairy housebreaker would easily have the upper hand in any confrontation. I locked her in another bedroom so we could plan an exit strategy for the raccoon without her complicating matters further.

Back to the intruder. We decided that patience was the best alternative. We also discovered we possessed little of it. Armed with a broom, I sat in a chair at the top of a few steps that overlooked the field of battle to prevent any advance by the invading quadruped into the main living area of the house. 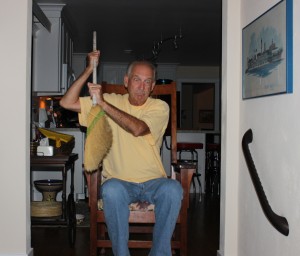 I was sure when it finally came out of that room, it would see me, realize that I was much too daunting an adversary and walk quietly out the open door and back to freedom. Fifteen minutes later, even though we had cleverly placed chicken bits on the floor as enticement, there still wasn’t a hint of activity from the raccoon’s makeshift lair.

It was then that my ingenious wife went into action. Girded with a leaf blower, she bravely crossed the enemy’s lines and stuck the blower under the bed on full power. Not 10 seconds later, a nonplussed raccoon emerged with a very angry expression and intent on retribution, or so I thought. Instead of walking out the open door, which was but a few steps away, he turned toward me. Being ex-military, I exercised one of the tactics for which I had so studiously trained, retreat. Fortunately, the beast decided that rather than pursue me, it would display its displeasure from atop a storage unit. That’s when I decided a camera would be a better weapons choice. 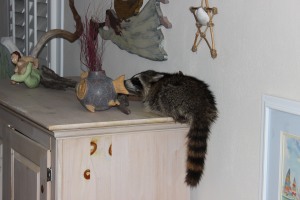 These people are starting to aggravate me..

After several more minutes, with our composure again intact, we took the broom and encouraged the fellow off toward the door with some gentle taps. He made his way down and out, but not before peering back one last time with a menacing look as if to say, in Arnoldesque fashion, “I’ll be back!” 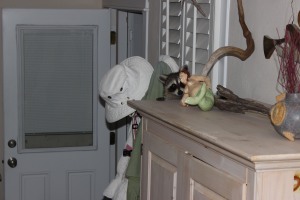 “This is just round one, folks.”

And in case you’re wondering, we have permanently repealed our “open door” policy.

34 thoughts on “The curious case of the carousing critter….”