Dictionary.com has a definition of rich: “Having wealth or great possessions; abundantly supplied with resources, means, or funds; wealthy.” 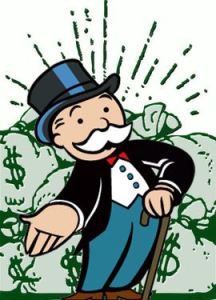 My great-uncle, Ford Garrison, did not meet this definition. He was, in fact, the very antithesis. He was also the family “black sheep”. Never fully employed, he subsisted  piecemeal on a small government pension he earned by having been slightly wounded in the arm in World War One. He always needed a shave, which was not as fashionable in those days, and I can only remember him wearing one set of clothes; an old suit with a vest. But he always wore a rumpled tie with it as well. He still had his dignity and wanted that to be on display.

He lived in my hometown of Elmira, New York, shuttling between one-room furnished apartments. When he eventually failed to pay rent, he would move on to another. With very few worldly possessions, this was not particularly a problem for him. Occasionally he would “work” by selling trinkets on street corners. Little puzzles and gadgets that parents would buy to amuse their children. However, this was pretty much the extent of his work life from the time he got out of the army.

The gadget I recollect most was the old-fashioned gyroscope top. If you’re near my age group, you may remember these fascinating devices. You’d wind a string around the top shaft then pull it hard to set the gyroscope going. It would spin for what seemed like forever. You could balance it on your finger or a knife edge or place it at a 45 degree angle on the edge of a table and it would still hold its position. 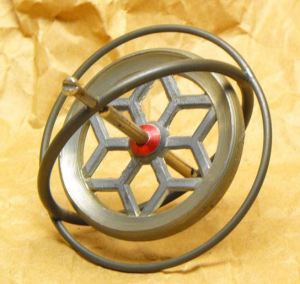 As you might expect, my grandmother (his sister) and my mother were not enamored when he came around to see his little nephew “Alfie”. Like most parents, they feared his less than stellar lifestyle would influence my own aspirations in life. Their concern was not entirely without merit since I thought Ford, as I called him, was one cool dude. You see, when Ford was a very young man, he was quite a baseball player. Folks would tell him he had big-league potential. That ended with his stint in the army and the injury. But as far as I was concerned, he was every bit that professional baseball player. He spent precious hours playing catch and hitting balls with me. He’d give me hints about batting and pitching. He was always encouraging, never disparaging about my progress. He never missed one of my little league games, even though he’d have to walk a couple of miles to get to them. No one ever offered to bring him.

When we weren’t playing ball in the backyard, he loved to walk me down to the lunch counter at Woolworth’s and buy me a “sodie”, his name for an ice cream soda. You can imagine how excited I was when he would say “let’s go get us a sodie.” I can still see him happily plunking down the quarters for our sodies, which I knew was a fortune for him to be spending, just to see his little Alfie smile. He often had one of those aforementioned trinkets in his pocket. He would hold one out, rather than get paid the money he so desperately needed, just to have one to give his special nephew.

He told me many tales, many of which were greatly embellished I’m sure. But his delivery was so believable that I didn’t have the slightest notion of questioning their veracity. These were the only things that Ford had to offer me, but he acted like he was taking me on a trip around the world. And to me, he was. He was just one of those men with a heart of gold, just not the material means to match it.

I loved Ford. Every time I think back about those years, I smile. And while my family was relieved I didn’t follow his lifestyle, I took with me the best he had to offer, himself.

Dictionary.com has another definition of rich: “Of great value or worth.”

So what do you think, was Ford my rich uncle?