I expect you’ve all heard the colloquial quip that says: “I ain’t got but one nerve left in my body and damned if you ain’t just got on it!” Well, I’ve got a lot of nerves left in my back and “damned if somebody didn’t get on all of ’em!”

I’ve been experiencing back pain off and on for well over 3 decades. It’s come to a head this year and needing some serious treatment. Previous steroid injections were effective for years, but no longer. As a result, I agreed to a procedure with my pain management doctor called a Radiofrequency Neurotomy or Medial Branch Nerve Ablation. That’s fancy medical talk for “we’re going to go in and fry those suckers up and serve them en brochette!”

Or more specifically, use needles to inject a numbing solution to all those nerves in the lumbar facet joints and then insert a “heat” needle to burn them. This will create a sort of blister that will eventually kill the nerves and prevent them from sending pain signals to the brain. Now you may be thinking “if he had a brain, he wouldn’t be subjecting himself to this”, but after so many years of pain and discomfort one will tend to “shoot the moon” looking for relief. 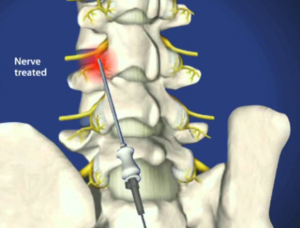 On the positive side, this procedure does not affect the nerves that are important to the vibrancy and animation of muscles in the legs. But on the negative side, if it helps at all, (60-70% success rate), it will usually need to be repeated after a year as the nerve cells will regenerate. Eat your heart out little lizards with your grow-back tails.

As anyone who is about to let a doctor probe and manipulate the inner workings of your body like some alien abduction, I read up on the procedure quite extensively. Without exception, they all indicated that a type of IV sedation would be used to quell any anxiety for the patient. Right. And pigs fly. About 5-10 minutes in I realized they were sticking needles in my back already, but there was no IV in my arm. Hmmmm, I thought to myself, maybe it’s in my leg and I didn’t notice since I’m lying on my stomach. I didn’t want them to think I was a wimp, so I didn’t say anything. I am a wimp, I just didn’t want them to know it.

What the doctor saw during the procedure..

Afterwards, when I asked about the sedation, the nurse said “Oh no, we don’t do that, we want you to talk to us and let us know if we hit the wrong spot.” What?! Some things are best learned in the past tense. Turns out they use a local anesthetic with an IV. The worst pain I felt during the whole thing was no worse than the daily pain I often experienced anyway.

So that’s my story and I’m sticking with it. It will be one to two weeks before the nerves actually die and it’s then that I will know if it was a success and a long-term solution. In the meantime, please don’t say anything that might get on my nerves, or at least wait until they’re dead.