Based on a couple of recent posts about my trip to Colorado, a few of my followers commented how much they enjoyed the “serious” side of Big Al. While these comments are well-meaning and taken in the spirit in which they were intended, this cannot stand! My reputation as a cyberpunk and general lay about must always be paramount! In that vein, lest you pierce the armor around my true psyche, I post the latest installment of my series; “They did what?”

1. The “No Texting while Grazing” award to the Swiss dairy farmers who have implanted communication devices in their dairy cows. It seems that the sensor can detect when a cow goes into heat by recognizing a change in body temperature and immediately send a text message to the farmer’s phone to let them know. The farmer can then breed the cow with a better chance of producing a calf. And just in case the cow has a penchant for Latin lovers, the text can be sent in Spanish or Italian, as well as German, English and French. No word yet on whether the bulls will be rigged for “sexting” back since, as with the male of almost every other species on earth, the answer is pretty much always yes.

“OK, which one of you deviants sent this?”

2. The “Hey man, you’re my best friend, dude, no really, dude, I love you man” award to pet owners in Colorado. Seems those folks who have been legally prescribed medical marijuana in the state think that since it’s good for them, then it’s got to be good for Fido. Veterinarians are reporting a large uptick in cases of “stoner” dogs being brought in for emergency care. While only a few cases have been critical, the main concern expressed by the Veterinarians is that this will become a “gateway” treat for the dogs and soon they will be demanding methbones instead of milkbones.

3. The “I Am Woman, See Me Carjack” award to the pregnant Ohio woman who stole a tow truck that had already attached her SUV for impounding. The woman, Sophia Davidson, who was 8 months pregnant, jumped in the truck cab and took off. She finally stopped when she crashed because she had ground the tires down to the metal wheel base and put deep grooves in the highway. When questioned why she had done this, she replied that she had such a strong craving for pickles and ice cream, she just couldn’t wait until she paid her fine. 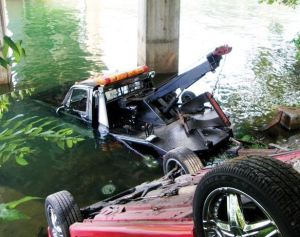 4. The “Isaac Newton was a Total Nerd” award to the Michigan State University professor who suddenly stripped completely naked in his Calculus class, and proceeded to run down the hall yelling “there is no f__king God.” The unnamed professor was taken into protective custody and transported to a hospital. The students in attendance at the time, ever loyal to their “sometimes eccentric” professor worked on a theory as to why the event happened. Using the calculus that the professor had so diligently taught them, they came up the following formula to explain it:  \int_{a}^{b} f(x)\,dx = F(b) – F(a)= asshole.

5. The “Incapacitating Ice Storms and the People Who Love Them” award to The Weather Channel. Not content anymore just to tell you a life threatening blizzard is on your doorstep, The Weather Channel is now going to name winter storms. In the most egregious case of copycatting on record, TWC will emulate the National Weather Service who started naming hurricanes several decades ago. Using Greek and Roman character names like Athena and Zeus and Caesar, TWC will no longer let you refer to the crippling storm that cost you your house as “The blizzard of 08”. It will henceforth be known as the 10 inches of Brutus.

“Thanks for tuning in folks. We hope you liked our last storm, Aphrodite.”

6. The “Fly by the seat of your pants” award to American Airlines. American, whose slogan is “there’s something special in the air”, now has something special on the ground. Their fleet. It’s down for inspection due to seats coming loose in flight on three separate occasions in the last week. While there is no clear indication of what error caused the seats to become unbolted, nor a timetable for the inspection to be completed, the airline will try to make up for the critical loss of revenue by offering “standing room only” on future flights.

New American Airlines Perk:
For $100, passengers can choose from our vast array of carry on seats. Note: bolts not included.