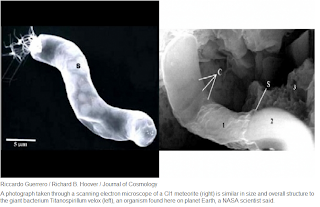 The above headline refers to the fact that scientists have discovered that microbial life existed on a meteorite that fell to earth years ago. By the miracle of “microscience” they were able to find fossilized evidence of a particular bacterium that almost exactly matches one that is found here on earth. This, they say, is proof that life exists beyond our solar system.

That’s right folks, taking this discovery to it’s logical conclusion, some ET alien may be blogging as you read this. OK, let’s get the alien jokes out of the way before we proceed. Q. How do you tell the difference between Big Al and an alien blogger?  A. The alien will be the good looking one. Q. What do you get when you cross an alien blogger with Big Al? A. The only highly evolved alien with a feeble mind. Q. Why did the alien blogger cross the Universe? A. To see if intelligent life existed on earth. He returned with Big Al’s blogs as proof that it doesn’t.

The point is, I’ve believed for years that we are not alone. And certainly not because I have any scientific insight that no one else has. In fact, I have no scientific insight. What I have is common sense. Here are my reasons: (creationists may want to skip this part)

1. We would have to be totally ignorant (not to mention arrogant) to look out at the vastness of the heavens and declare “nope, it’s just us”.

3. Why would we expect the life forms to resemble in any way what we look like? Have you seen an octopus lately? It should look alien to us.

4. If the universe is 12 to 14 billion years old as it appears to be, does it make sense that life forms only evolved in the last billion or so years? What a waste of time!

5. Evolutionists may cringe, but the elements needed for life as it evolved on earth may not be necessary for life elsewhere.

6. There are hundreds of examples of unexplained phenomenon on earth with no earthly explanation.

I leave you with this observation to give you pause:  Nanu Nanu.