Looking north along the Atlantic toward Cape Henry and the Chesapeake Bay on the upper left.

Virginia Beach, on coastal Virgina, is nowadays best known as a vacation resort with emphasis on tourism. But every day around here could be “talk like a pirate” day. This area is so steeped in pirate lore that it wouldn’t surprise me if one day I received my change at the drugstore in “coin of the realm.”

In fact, this area possesses a great deal of history. One part of Virginia Beach, Cape Henry, where the Atlantic Ocean rounds its way into the Chesapeake Bay, was the first landing place of the settlers aboard three ships, Susan Constant,  Godspeed and Discovery in 1607. They stayed for several weeks before moving on to a more sheltered anchorage, the now famous Jamestown Settlement. This initial arrival is commemorated at First Landing State Park, Virginia’s most visited state park.

In a milestone event toward the end of America’s fight for independence, the French and English fleets engaged in The Battle of the Chesapeake just off Cape Henry. Though there was no clear winner, it prevented the British from moving reinforcements to the aid of General Cornwallis at Yorktown. The rest, as they say, is history.

Then there is the Civil War engagement, Battle of Hampton Roads,  the first-ever sea battle fought between ironclads. The federal ship, USS Monitor, and the confederate ship, CSS Virginia, fought to a draw where the James and Elizabeth rivers converge to empty into the bay, which effectively ended the days of wooden ships for all navies of the world.

But nestled in between those periods, at the beginning of the 18th century, this area was a playground for pirates who preyed on merchant ships. These ships used the Chesapeake Bay to access the thriving ports of Norfolk, Baltimore, and several lesser commercial ports. One pirate in particular, Edward Teach, more commonly known as “Blackbeard”, had an especially lucrative vocation plundering ships in the waters around Virginia Beach. While his two-year reign was relatively short-lived, his legend is not.

Our street, Lookout Road, has a prominent place in this history. Blackbeard and his cohorts liked to conceal his ship, The Queen Anne’s Revenge, in Pleasure House cove, some ways down from the Bay entrance where they could rest and re-provision without detection. However, they needed a string of lookouts, starting up at Cape Henry, to alert them when a commercial vessel, likely loaded with goods and treasure, was approaching. Upon a sighting, the first outlook would signal the next outpost, and so on, down along the bay coastline until Blackbeard, resting at Pleasure House Tavern, was informed. He would then foray to overtake and capture the unsuspecting and easy target. I will leave it to you to interpret what kind of establishment the tavern might have been. Historical records tell us the original was probably destroyed by the British during the War of 1812 and later rebuilt, possibly a couple of times. But a tavern existed there, dilapidated and unoccupied, until the late 1960’s. Condos now stand their lonely lookout at the spot.

Lookout Rd. is the long street running adjacent to the top tip of Lake Joyce (center right). The Pleasure House Tavern would have been to the left, just past the bridge going over the small lake. The condos form a “V”.

Lake Joyce, the fresh water lake behind our home, which at one time was actually connected to the Bay, has only one island, named Treasure Island, that according to legend was a “pirate headquarters” used for meetings and dividing up the booty. While there is no concrete evidence to back this up, don’t tell the generations of kids, including my own, who have paddled over to camp and play pirate on the island. It would lose its charm.

Most pirate history concerning the east coast of America centers around the pirate home ports in North Carolina and points south, to Florida and several Carribean Islands. In fact, most of the loot they took came from those areas. However, Blackbeard’s nefarious actions in Virginia were severe enough that it was the Governor of Virginia, not North Carolina, that actually put out a bounty on the infamous Edward Teach. He secretly hired navy Lt. Robert Maynard  and equipped him with two frigates. Maynard pursued Blackbeard and eventually caught up with him off the North Carolina coast. A pitched sea battle ensued with hand-to-hand combat aboard Maynard’s ship, The Jane, in 1718. Blackbeard was killed by the crew during this engagement. His head was severed and hung from the Bowsprit of The Jane as a warning to any other pirates who might try their luck in the area. 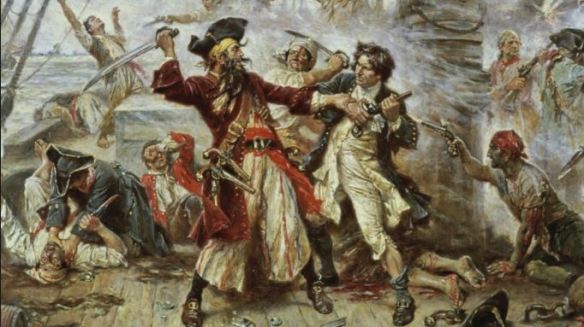 And so the story ends. Now avast me hearties, that be all the tales of the high seas that I have for ye today. If you jackanapes would like to shiver me timbers with a comment, be quick about it or it’s hangin’ from the yardarm ya be.