There is a great line in Clint Eastwood’s movie “Unforgiven” that goes something like this…. Good guy to bad guy: “I thought you were dead.” Bad guy to good guy: “So did I; turns out I was just in Nebraska.” (Uh oh, there goes the Nebraska contingent of my precious few readers).

Well, I thought I was out of the country last week; turns out I was just in West Texas. My wife and I had a very enjoyable few days in Texas, just west of Austin. It was a planned mini-reunion with three of my fraternity brothers from college and their wives. Our host was Les, a retired pediatrician who was a couple of years behind me in school. He owns a fantastic ranch there with over two hundred acres in the harsh yet enchanting foothills of West Texas hill country. He and his lovely wife Ellen moved out there a few years ago after he left his very successful practice in Austin, although he still oversees a pediatric emergency clinic that he started back in town. 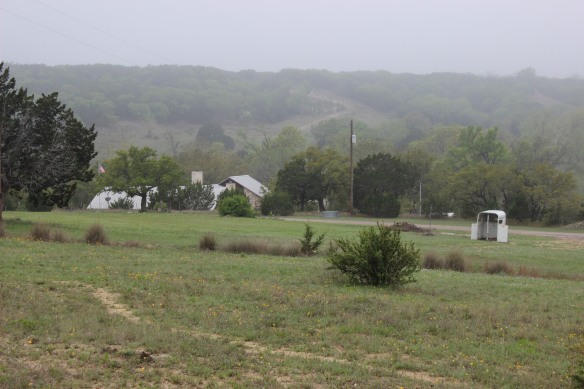 A view of the top of the ranch from across the road.

The name of their little town is Oatmeal. Yes, that’s right, Oatmeal, Texas. And I’m told that their barbecue festival is to die for. And judging from the tremendous meals that Les and Ellen provided for us, I don’t doubt that one bit. But it’s a pretty good pony ride from Oatmeal to the ranch. If you’re a city-slicker, and I most certainly qualify, you are not prepared for the vastness and isolation to be found in “these here parts”, to use the vernacular.

Patty with one of the barn cats who followed us on our many hikes.

But the inherent beauty of this ultra rural area is quickly realized. One has only to stand still for a moment to enjoy the piquant aroma of the ubiquitous cedar trees wafting in on the breeze. From the verdant valleys and creeks, to the rocky hillsides with abundant brush and natural caves, you are swept into the setting of a John Ford movie, totally bereft of high-tech and the hustle-bustle of everyday life, if that’s your thing.

One of the amazing things about this area, which was ground zero in the heyday of the Comanche Indian nation nearly two hundred years ago, is the ease with which artifacts, mostly arrowheads, are still uncovered to this day. This includes items from the PaleoAmerican or Clovis period about 10,000 to 12,000 years ago. Les has a nice collection of these to attest.

I always knew Les was a “straight arrow” kind of guy.

Les doesn’t have any Longhorn steer on his ranch, although his neighbor does. You have to understand though, that “neighbor” is a very relative term. He does have three horses, including one that is about to foal. Again, for us city dwellers, that means have a baby. My brave wife, who used to have a horse as a teenager, was delighted to be able to ride one through the hills on our second day.

One oddity we noticed was prickly pear cactus growing out of the many massive, adorning live oak trees that populate the ranch. When we questioned this, it was explained that raccoons often nibble on the fruit of these cactus as a kind of delicacy, then deposit the seedlings from the plant in their scat when they go up into the trees and relieve themselves in the crevices and leaf gatherings in the tree. And so goes the cycle of nature, one poop at a time. 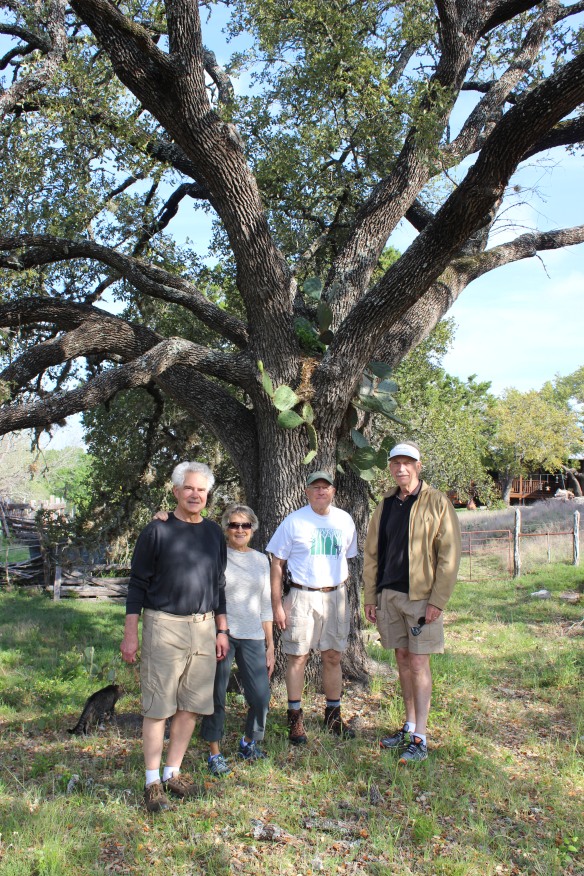 We were the interlopers here. This is the home of much wildlife. Mountain lions, coyotes, bobcats, snakes, wild hog, the list goes on. In fact, on a lone walk one day, I encountered a wild hog the size of small car, or so it seemed. Fortunately, as stunned as I was, he was more afraid of me and ambled off into the cover. Later that evening, my host showed me a pair of tusks taken from a boar he had shot. It was only then that I realized why they are considered such a vicious animal….and how lucky I was. In fact, they are considered such a menace to crops, pets and farmland that there is open hunting season on them throughout the year. 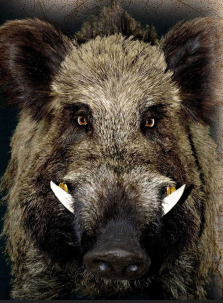 Which brings me to the gun control issue. No matter what side of this you are on, it doesn’t take long to understand why the government will never take the guns out of Texas (or I suspect, any of this type of wide open country, no matter the state.) On our first walk to see the area. I noticed Les had a gun holstered to his side. Noticing my look of curiosity, Les pointed out that it was a “snake gun”, basically a .45 loaded with a buckshot type of ammunition in case we encountered any evil-minded and venomous critters of the genus Crotalus.

Notice the sidearm on his right side.

But what I admired most about this captivating place was how green it was. No, I don’t mean green in color, though it certainly was; I mean environmentally green. Les is a true patriot and a man of action, not words. Les’s ranch is self-sustaining. He uses several solar panels to provide electricity to his home and out buildings. He has electric lines coming into his ranch, but uses only from the electric company what energy that the panels are unable to provide. But even more impressive is his water system. It is one hundred percent rain water. He has a roof rain water collection system that is state of the art. Using large vats (one as big as a two car garage), he is able to store many thousands of gallons of water and filter it into a potable state. No wells, no water lines, just good old God-given rain water for the house, the pool, the garden, etc.

Another view of the ranch house. One of the smaller rain water tanks is on the left.

Well, we’re back in our home in Virginia. But I’m a more learned person now after visiting this area of the country and the wonderful people who inhabit there. I’ve often read about the pioneering types that founded and built this great land. This was a chance to see first-hand how that underlying spirit still resides.

A fun get together after 50 years.