A tragedy was barely averted in downtown Norfolk, Virginia recently when a man’s inner child escaped and ran amok on the banks of the Elizabeth River. Strolling casually along, the man suddenly came upon a 40-foot rubber ducky that was on display in this coastal city. It was then that his inner child, little Alfie, burst forth from his psyche and began to scream and shout “my ducky, my ducky” over and over again.

As a crowd gathered to see what the commotion was, the child, suffering from a rare condition called “Flashback Syndrome”, began to enter the water to play with what he perceived to be his old friend “duckybill” from his childhood days. Struggling mightily in the rapid current of the river, he was finally rescued by the local EMS squad just as he was trying to mount the enormous duck to make what he referred to as some “weally cool bubbers.”

When interviewed, the child, now safely ensconced in the body of his grown self again, known to us all as Big Al, remarked; ” I don’t know what came over me, I normally have total control of my inner child but I guess I just wasn’t paying attention.” With that, he calmly left for home, clutching his teddy bear “snuggyboo” ever so lovingly. 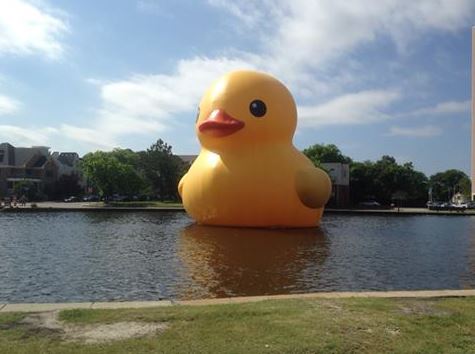