Someone once said, the only things you can count on are death, taxes and change. The first two are pretty much inviolable, but change can either be for the better or worse.

Discovery of fire, the wheel and most certainly sliced bread are a few of the changes that I would call for the better. But one change, happening as we watch, is confounding and definitely for the worse. I’m talking about airline travel.

When I started flying, propeller driven planes were essentially all you could book. It was considered an almost surreal and luxurious experience to travel by air. So much so that people dressed up for the ride, men in coat and tie, women in dresses. Decorum during the flight was an unwritten rule. Wow, so much has changed. I won’t go into the airline dress code of today, suffice it to say that if your seat-mate has their private parts completely covered, you’re relieved.

But that’s not the worst of it. Since the tragedy of 9/11, airlines the world over have pretty much shut down the spate of hi-jacking that plagued us for decades. What we’re dealing with in its place is the myriad nut cases that are looking for their 15 minutes of fame by diverting an aircraft with criminal antics, actions that require either forcible restraining or emergency landings, or both.

It’s at the point now where we will need background checks of all passengers before they are allowed to board a flight. Or maybe we could start with having each passenger fill out a questionnaire before attempting to buy a ticket. I’m thinking it would need to look something like this:

Please note whether the following statements are true or false:

If you answered TRUE to any of these questions, please have a seat in our executive lounge where one of our airline “agents”  will speak with you about joining our “freaky fliers” bonus miles and incarceration program.

In case you think I exaggerate, each of these incidents have actually happened in the past several months.  Perhaps a much simpler, one question form, would do the trick as well…..True of False: My mother never really loved me as a child.

What do you think? 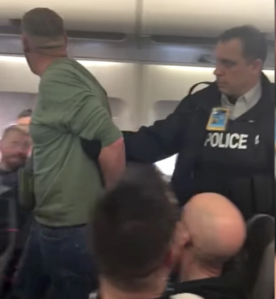 “Leavenworth is ready when you are!”