I have tried to live a good life. Since I can remember, I’ve always been a rule follower. I’ve never been arrested and never taken an illegal drug in my life. I’ve tried to set a good example for my kids and grand-kids. I’ve never joined a suicide cult (but then you know that, don’t you.).

But you see, I do have one big vice. Granola bars. I am hooked on those bad boys. It’s not enough for me to just pick up a 6-pack when I go to the grocery store. No, I make a designated run to Sam’s Club so I can buy in bulk.

Don’t let the picture fool you. I would never travel the 10 miles to Sam’s Club and only bring back two boxes. The ignominious amount that I purchase is best left untold. Suffice it to say, when they see me come in the door, they send a forklift driver to the back to bring out another pallet. I like granola bars.

Trouble is, my wife thinks this is a bit excessive and not good for me. This, despite the many obviously healthy ingredients listed on the side of the box. She uses such lame arguments as the high caloric content, and that I was skipping meals and eating bars instead, and that anything in excess is bad for me. Of course, as a man, I countered with infallible reasoning, Such as, I’m not a druggie, smoker or alcoholic and this is my only habit. Not to mention that as a good capitalist, I have a obligation to the stockholders at General Mills.

But we settled it, just as we have with any impasse that we have had during our marriage. We compromise. We do whatever she wants. I agreed to give up granola bars cold turkey. I did, very successfully, for several months. I felt great, lost some weight, and started eating lots of fresh veggies and fruit. And then, out of the blue, General Mills decided that they needed to start advertising this product on TV. I was ecstatic. It was like seeing an old friend again. It was obvious to me why they were doing this. They missed me. I even envisioned the marketing meeting going something like this:

Marketing Manager: “As our only item of business today, I must report that our granola bar sales have dropped precipitously over the past few months.”

Advertising Manager: “Yes, and I can tell you why. Big Al’s purchases have disappeared entirely!”

AM: “No, he’s still with us. For some inexplicable reason known only to her and God, my wife follows his blog.”

MM: “Well, what are we going to do about this? We’re looking at a government bailout here!”

AM: Not to worry, I’ve started an advertising blitz for our granola bars that will bring him back into the fold. It will mean less air time for cereals, but that lost revenue will be more than offset by Big Al’s spending sprees.

MM: “Great. I believe this calls for a new stock offering. This meeting is adjourned.”

Then the inevitable. I became an underground user. First, I started slowly. I’d go buy a small, easy to hide two-pack. I went to a different store each time so no one would recognize me and call my wife. Yes, I was “bar hopping.” Then I couldn’t stand it anymore. I told my wife I was going to Sam’s for a package of those “1 roll = two years supply” paper towels, but I was really going for the bars. I picked a time when I knew she wasn’t going to be home so I could bring in my contraband.

Finding a hiding place for those big boxes was a challenge. But I thought I had found the perfect place. It was on a lower shelf of the TV stand in the man cave. It was completely hidden by a bed in that small room and kind of difficult to get to. But that didn’t matter as long as I could get my fixes.

And then it happened. I was busted. More woeful yet, it was by a trusted friend. The dog. I have no one else but myself to blame. You see, I began letting her lick the crumbs from the package after sneaking a bar. Then she became addicted. I had created a monster. It was only a matter of time before she would discover my cache. Then one day my world fell apart. This is what awaited my wife when she returned home. 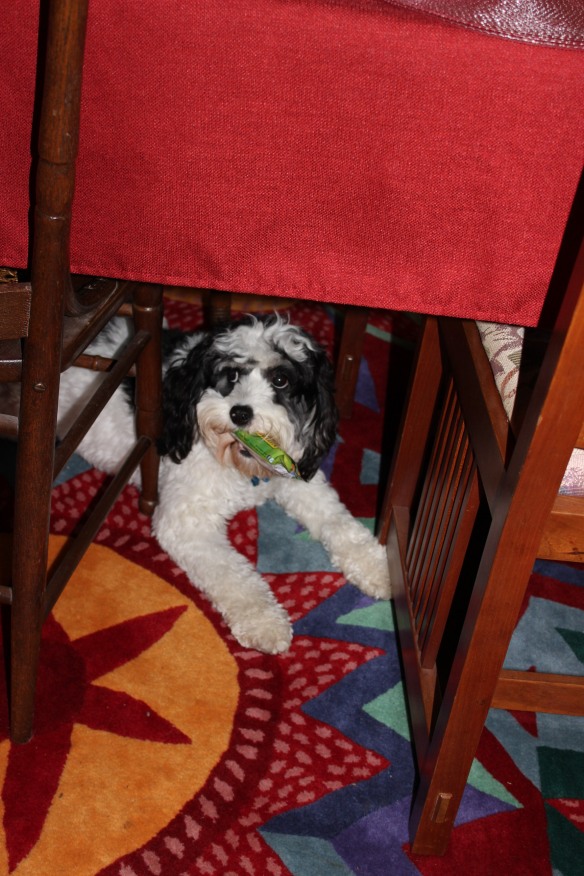 I had almost convinced her that the dog got it out of the neighbors trash when my conscience got the better of me. I confessed.

The story does have a happy ending. I’m in counseling now and regularly attend meetings at GB Anonymous. I’m doing well and even eat 3 square meals a day again. My sponsor is a great help to me, even though his addiction was Pop Tarts. If anyone out there suffers similarly, I would be glad to talk with you about it. Just don’t call on Tuesday, Thursday and Saturday evenings….those are meeting nights.

41 thoughts on “One man’s addiction to bars…..a story of redemption.”