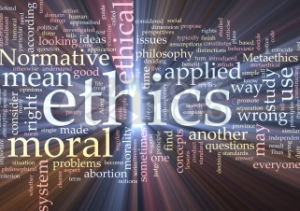 My grandmother, Eloise Blondin, was the best self-taught philosopher I have ever known. Born at the turn of the last century, in 1900 to be exact, she lived a hardscrabble life for most of her 88 years. She was raised on a meager farm with 3 older brothers. Her father died when she was young, so she learned the value of hard work and thrift early and often.

She married, but lost her husband when my mother was only 12 years old. He died from Buerger’s Disease, a rare and excruciating circulatory illness similar to gangrene. On hot summer nights when the windows had to be open, her neighbors would complain because they could hear painful screams emanating from their frame house. It devastated them economically. After his death, she worked two jobs every day to pay the medical bills and provide for my mother. Let’s just say she had a first-hand idea of the kind of curve balls life could throw at you.

These experiences are probably what shaped her rather circumspect personality. While she was caring and compassionate with my brother and me, she never missed a chance to teach us life’s little lessons along the way. But it was the way she did it that was so endearing. No lectures, scoldings or homilies. That wasn’t her style. She preferred terse, cryptic little phrases that never seemed to be quite finished. It fell upon us to interpret them, but when we finally did it didn’t take long to see that she was preparing us for the inevitable problems that we would have to deal with in our own lives.

Following is a translation of her 6 favorite philosophical locutions:

1. “They’ll come a time….”   As typical young boys, we didn’t understand why we had to do something that didn’t return any immediate value. Whether it was saving money or developing good work habits, we just couldn’t see the long term benefits. This was her way of saying “you may not see it now, but someday you will be glad you did this.” She was right.

2. “You’ll rue the day….”   This was kind of like #1 but in reverse. If we were forming a bad habit or not taking her advice seriously, she would invoke this phrase as a way of telling us that the consequence of our wrongful actions today would be visited upon us at some future time. Oh, how she was right!

3. “You’ve got to get up pretty early in the morning….”   This cousin of “the early bird gets the worm” was a favorite of hers. To her, if you weren’t out ahead of the others, then you were most certainly behind them. In her mind, leading the way in an endeavor was much easier than trying to catch up. Pretty sound advice as I look back.

4. “I like me, who do you like…….”   This was my personal favorite. This was the quintessential put-down we would hear as soon as we started to get a big head about something. While she was outwardly proud of any accomplishment of ours, she was not tolerant of our becoming too boastful about it ourselves. This was her way of saying “watch out, it’s easy to be brought back down to size.” It worked.

5. “Well, I guess the folks are about as good as the people…..”  This was her version of a pep talk. Whenever we got down on ourselves or complained about other kids having more than us, she would pop out with this line and always get us laughing about it. I still snicker when I think of it.

6. It’s like the quarter in the corner….”   This was easily the most enigmatic of her unique expressions. She loved to tell us that if you spent an entire day making the house immaculate for visitors, as soon as they arrived they would accidentally drop a coin and it would roll straight to the cobwebs in the corner you forgot to dust. The lesson to us: don’t assume you have covered all the possibilities and eventualities of an upcoming event. Double and triple check everything if you want it to be a success.

You won’t find these philosophies listed up there with the doctrines of Plato and Aristotle. But for one young and impressionable little boy, they were far more important. They  had a direct positive affect on my life and for that I am ever grateful. 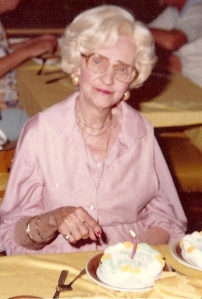 Grandma Blondin on her 80th birthday

** Philosophy Artwork from Can Stock Clipart